Planning your food tour of Vermont? That sound like a fun trip! Be sure to plan a stop into one of the Cabot Creamery annex stores to sample award winning cheese. Not only are they store #2 on my list, the folks at Cabot very generously lay out samples of almost every cheese they make as well as some of their other favorite Vermont food products. They know as well as I do that if you offer samples of a quality product then people will do just as much purchasing as eating. I have never once left Cabot empty handed or hungry 😉 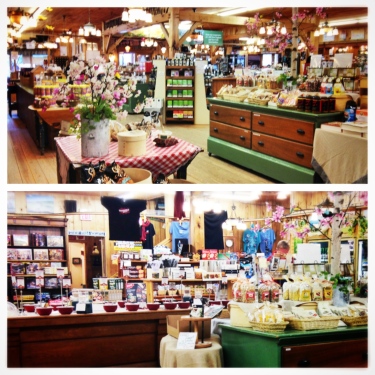 Cabot Cooperative makes outstanding cheese, has a great reputation, and is inseparable from the Vermont food web. A staple in our house, I favor the horseradish cheddar, but Tall Dark and Handsome’s favorite cheese is the Cabot Clothbound Cheddar (aged by Cellars at Jasper Hill) which won a silver at the 2012 World Champion Cheese Festival.  In fact Cabot wins awards every year. So far in 2014 Cabot has won Best of Class awards for their  2+ year Cheddar, Pepper Flavored, Hot Buffalo Wing Cheddar & Cottage Cheeses alone at the World Champion Cheese Festival.

In the earliest days of Potlicker, I was terrified at the idea of walking into a store to sell my jelly. I would sit in the car, juggling little jars and slips of paper. In my nervousness I checked my teeth, dropped notes, and tried to assure myself nothing would go wrong. I told myself that this jelly was not going to make or break me, even though it felt like it.

One such day I was sitting outside the Cabot annex store in Quechee Vermont. After mustering up some courage I walked in like I belonged there and met Laurie. She was welcoming, charming, full of smiles, and had only a few questions for me…. And I was able to say YES to each one!  First hurdle achieved.

I left my samples in the capable hands of Laurie and within days I had happy news they were placing an order!

Currently 5 Potlicker flavors are carried at the two annex stores in Vermont.

I can not thank Laurie and the folks at Cabot enough for taking a chance on me. They likely do not know that they are my first paying customer (now they do!) but I will never forget it.