I have a couple of pans that I am truly loyal to. Ones which live within reach always. They are never put away and they are never in the way. The one that lives somewhere near the front of the stove is a 10” skillet that use to be my grandmothers.  It is old, loved, well seasoned, and I truly consider it one of my treasures.  I cannot imagine my kitchen without it.

The cast iron is most often in use for Standard Daily Breakfast Procedure but occasionally it produces some real good eats like Chile Rellenos Baked in Corn Bread, or Bigtime Berry Biscuits. 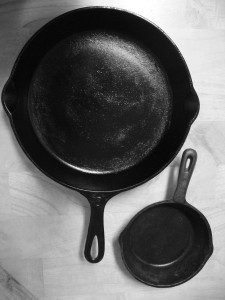 Cast iron is basically iron that is poured into a mold to create some useful implement.  Originally, pots and cauldrons were made from brass because iron could not be worked until furnaces creating heat high enough to melt iron were invented. Once these amazing furnaces were invented, pots could be made by making molds out of sand and pouring molting iron into the mold.

The original cast iron cooking pots and cauldrons were not as sturdy, had thick walls and heated poorly compared to todays cast iron. Kitchens of the time had hearths and fireplaces for cooking, necessitating cooking pots that could stand or hang over a fire. Stoves with cook tops did not come into common usage until the 1700s. As stove tops became more common, so did molded pots and pans like cast iron skillets. As technology changed, the annealing process came into play and made it easier to produce thinner, therefore lighter, pans. In the late 19th and into the mid 20th centuries enameled cast iron became a popular option. Enameled cast iron is cast iron that has a vitreous enamel glaze. More recently it has been replaced by modern metal alloys, although, it still remains a popular material for dutch ovens.

By 513 B.C. the Chinese had fashioned a furnace that could produce the amount of heat needed to melt iron. The English and Western Europe had mastered this by 1200A.D.

Although later to the game, it might have been more popular in European society. In the 15th century cast iron cauldrons became common and valuable in the medieval kitchen. These cauldrons were typically big bellied pots of varying sizes that could be seated on three or four stubby legs and/or hung from a chain or handle.

Throughout the 1800s cast iron cookware enjoyed tremendous popularity. Manufacturers that arose during that time include Griswold, Lodge, Wagner, and John Wright.

Everyone! Your grandmother swore by it and the Pioneers depended on it.

The cast iron cauldron was instrumental in giving us the rhyme: Pease pudding[porridge] hot, peas pudding cold, pease pudding in the pot, nine days old. Puddings were tied in a cloth and suspended to boil in the cauldron which itself held an ever changing, but not often cleaned, pot of soup or stew.

By 1776 Adam Smith, in his book, The Wealth of Nations, noted that the actual wealth of the nation was not its gold, but in its manufacture of pots and pans.  George Washington’s mother thought so much of her cookware she made special note to bequeath her cast iron in her will. In their expedition to the Louisiana territory, Lewis and Clark noted that their cast iron dutch oven was one of their most important pieces of equipment. Often over-looked in my opinion, are the various cultures of the American South. I hardly think that sausage gravy could be properly done without a cast iron.

Because the cast iron can do it all. You can go from stove, to oven, to campfire with these beauties. It can sear, fry, braise, bake, and even be a weapon! Think of the damage that can be done with a hot pan swinging through the air!

A well seasoned cast iron pan develops an impressive non-stick coating that you could fry an egg on with no additional oil. Cast iron has the ability to withstand and maintain  high cooking temperatures. It is also an excellent choice that heats evenly and retains that heat, making it a good option for long-cooking stews. An enamel or other coating over the cast iron prevents rusting, eliminates the need to season the metal, and allows for more thorough cleaning. Pigments used in the enameling process can produce great colors, Bonus!

Cast iron cookware leaches small amounts of iron into the food. Anemics, and those with iron deficiencies, may benefit from this effect, though those with excess iron issues may be advised to avoid cast iron. On an average diet it is highly unlikely that cooking with cast iron will bring a person to a dangerous level. While enamel coated cast iron may limit the leaching of dietary iron, it can be several times more costly.  It lacks some of the benefits of bare cast iron, but it doesn’t require seasoning and can be heavily soaped. 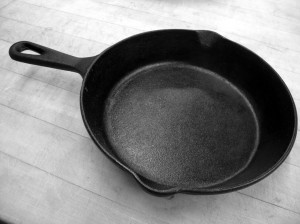 New cast iron that is not pre-seasoned is often sold with a protective coating (wax or shellac). This coating must be removed (typically by scouring) to expose the bare cast iron surface before the pan is seasoned. For already-used pans that are to be re-seasoned, the cleaning process requires more elbow grease, like rust removal and deep cleaning (with strong soap or lye, or by burning in a campfire or self-cleaning oven) to remove existing seasoning and build-up.

To re-season my pan after general use, first I scrub well, often with baking soda or salt. I also have a handy square of plastic that I use to scrape out any grossness.  If there is caked on food, add water to pan, and bring to boil while scraping up bits as they soften.

*I do not recommend using soap on your cast iron because it is porous among a host of other things, just don’t do it. Only risk soap if you have an EXTREMELY well seasoned pan and certainly do not soap often* 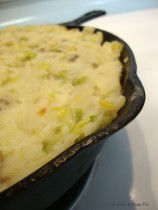 After scrubbing the pan, while damp, place pan onto stove top (or into warm oven). As the pan warms, wipe away water and before the pan becomes bone dry, rub approx 2Tbs of fat into the pan. Choose an old lint free towel and reserve it for this job. With a cloth, work the grease onto the bottom first; finish by wiping down the outside.   Ideally, you should have a nice black glossy finish without a greasy feel when touching the pan.  Fats and oils typically used for seasoning include lard, palm or coconut oil.

For new pans or to re-season, scour pan with salt and/or soap and maybe a wire brush. Soap is ok because you are going to grease it all away later. Rinse and dry. Apply a thin layer of grease over the pan’s surface and place pan, inverted, into a 350 degree oven. You will want to line a drip tray of some fashion to catch grease. Bake for one hour, turn off oven and allow to cool in oven. Repeat this process 2-3 times for new pans. 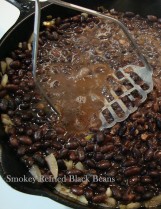 Heating the cookware facilitates the oxidation of the iron; the fats and/or oils protect the metal from contact with the air during the reaction, which would cause rust to form.

Newly seasoned cast iron will have a dark brown coating. If the seasoning process is repeated, or after prolonged use, this coating will turn glossy and black, and the non-stick properties of the pan will further improve. Just like the nonstick pans should be abused, neither should this.  It is rugged but try not to dig into it with sharp objects. I do not use metal to stir in my cast iron. I might use metal tongs or even a spatula, but rarely a metal spoon. Take extra care with enameled pans, they can scratch and chip.

Now that you know how to care for it, you can make something like sausage Sausage Gravy or Berry Baked Biscuits.

Make biscuits and place on top of berries in cast iron skillet. Bake at 425 for 20-25 minutes or until tops are golden brown and a toothpick comes out clean. 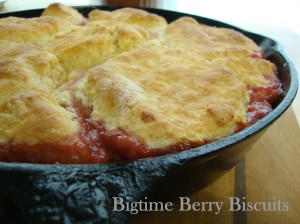 Scoop large helpings into bowls and top with whipped cream.

References include, from Mandatory Reading:

On Food and Cooking: The Science and Lore of the Kitchen. McGee.

One Reply to “Cast Iron Cookware”