I never understood the apple thing. Then we moved to New England.

I mean, growing up in Florida, OJ was THE juice. The only kind of apple cider that I knew or cared about was the sparkling kind that we got as a treat for holidays. The kid friendly champagne, if you will.

Tall Dark and Handsome grew up in New York on an apple orchard so apple cider was part of life. He was already deeply entrenched in apple culture. He tells stories about everything from friends burying casks of hard apple cider to apple cider doughnuts and hanging out at the Cider Mill.

Living in the frigid white North, I now have access to wonderful apples, apple cider, and all the other apple fun that I never knew existed. Lucky for me I am a quick study and scored some local McIntosh apple cider for this batch.

The flavor of fresh apple cider can vary with the season and with the variety of apple used. To think! for so many years I thought all apples were mushy and apple cider always sparkled.

Now I can tell you with confidence this is way better than generic apple jelly. Cinnamon and clove make this apple cider jelly taste like pie.

Spread this tasty jelly on PB&J’s and as a filling for cakes. Use it as a glaze for fruit tarts or a glaze for veggies like sweet potatoes or carrots. 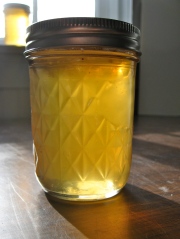 Combine the cider, juice, and spices and simmer covered 15-20 minutes. Strain through a cheesecloth and reserve spices for adding to the jars.

Combine the strained cider with the sugar and bring to a boil on med-high heat while stirring constantly. Once you have achieved a full boil, add pectin and return to a roiling boil and maintain it for 1-2 minutes.

Remove the jelly from the heat, skim any foam and check for gel. Ladle hot jelly into hot jars adding 1 clove and 1 allspice berry per jar. Wipe, seal, and process jelly in a boiling water canner for 10 minutes.