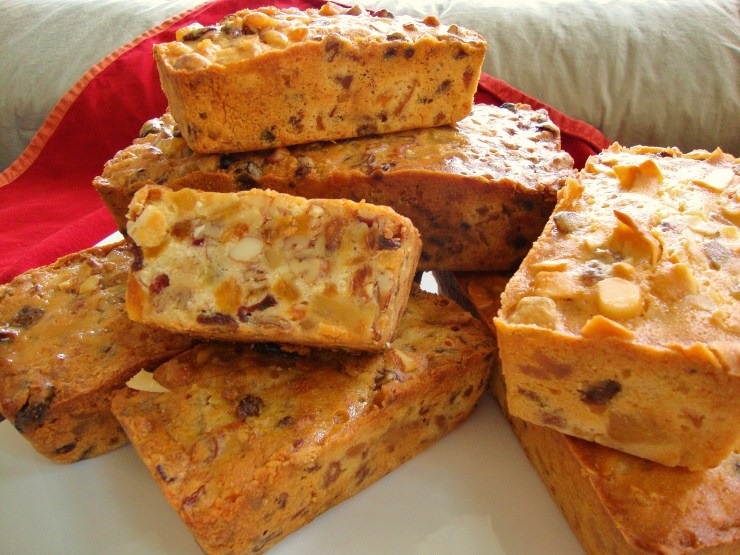 Tis the season for fruit cake. Seriously, Fruit Cake! I know that you have been anxiously awaiting the arrival of the yearly fruitcake.  Knowing that it is so popular, you will be happy to know that this recipe makes 3 loaves!!

In fact I’ve had fruit cake on the brain since August. It is almost never too early to make a fruit cake for the holidays. Being that they might be the singularly most expensive cake you will ever make or be blessed to receive, you should know how valuable they are! 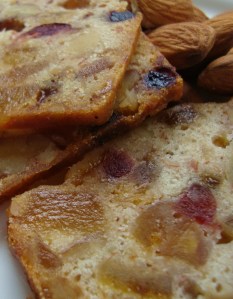 It is the epitome of a celebration cake. It is the traditional wedding cake which only the rich could afford. It is a cake reserved for company and holidays. They come in all varieties. Some fruitcake are a lighter cake or well spiced, while others are dark, heavy and rich. Cakes from the American South might have lots of pecans. Fruitcake from the islands will probably be soaked in dark rum. Other ‘cakes’ are more like breads with fruits and nuts. A good fruit cake will have no neon fruits but copious amounts of dried fruits and nuts. It will be rich with egg and have just a little flour to glue it all together. Which type of fruits and nuts all depends on what region you choose to represent.

It is not entirely clear when or where fruit cake started. Documented in early 4th century in Mesopotamia, cakes were made of chopped dried dates and a barley paste and Egyptian mummies have been found with a fruit and grain cake, stored for the afterlife. This cake would communicate wealth and admiration. My guess is they knew fruitcake would last into the afterlife. Fruitcake was also popular among Romans, they favored a heavy cake with pomegranate seeds and pine nuts. It was calorically dense and traveled well to feed the legions.

Across Europe, Medieval cakes were steamed in the cauldron except for special occasions. For the wealthy, puddings and cakes were served as part of the 4th or 6th course along with fruits and jellies. Not surprisingly, the history of fruitcake also closely follows the nut harvests in Europe during 1700s. After the harvest, reserved nuts were mixed and made into a cake that was saved until the following year. At that time, the fruit and nut cake was consumed in the hope that the ritual would bring another successful harvest.

Each century, it seems, has added to the weight of the cake. As sugar prices dropped, cups of sugar were added to the batter making the cake denser. Preserving food with sugar as oppose to salt became more common and candied fruits became readily available. The drop in the food cost also made the cakes more accessible and popular to the masses. It was During the Victorian era that practice of soaking the cake in alcohol became common and by the 1800s fruitcake was so rich it was even outlawed for a period of time. 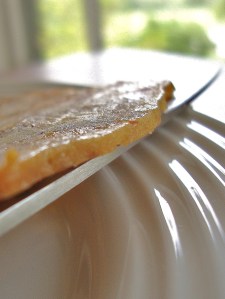 If it was so popular, then what happened? When did it become the butt of so many jokes? Johnny Carson loved to make fun of fruitcake saying there was only one existing cake that was passed around over and over again.  Most people are even afraid to try fruitcake for fear the jokes might be true.

People really have a bad idea of fruit cake, door-stop style. Truthfully the earlier ones were probably not what we think of as tasty. I don’t really even want grandma’s recipe. I want new-fangled white fruit cake with my favorite fruits.

My family likes the fruit cake enough to have a whole party for it. We had a fruit cake throw down and I can tell you that grandma’s style fruit cake wasn’t even in the running. The favorite lost by self-sabotage of cake intoxication. The top two contenders were a fruit only, darker cake style and my own White Fruit Cake.

This fruit cake is a little different than your average off the shelf cake. First of all, no neon fruits allowed. I make this cake with only my favorite dried fruits and nuts. I also use white sugar, it is more refined and the cake looks prettier.

For any staunch fruit cake haters out there, try the cake warm out of the oven. Let the cake rest 10 minutes and cut thick slices. I promise you will think twice about fruit cake. I have had many converts when I try this technique.

To properly age a fruit cake, baste cake with yummy booze. Wrap tightly and store in the back of the fridge. The older the cake gets, the firmer it will become. Window pane thin slices can only be achieved after 2-4 months of aging. 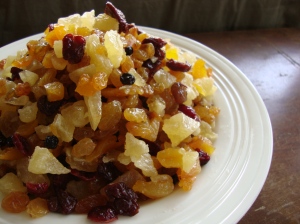 Combine fruit and liquor and let rest 8 hours or overnight. Pre-heat oven to 275 with a pan of water on the lowest rack. Prepare 3 loaf pans by heavily greasing them. Set aside.

In a large bowl cream the butter and the sugar. Stir in the beaten egg yolks. Grab a very sturdy rubber scraper. Add the fruit and nuts by parts. When you are almost done adding the fruit, begin to stir in the nutmeg seasoned flour. Combine all stirring with a large spoon until your arm hurts.

Give your arm a rest and turn on the mixer and bring the reserved egg whites to stiff peaks and then fold them into the batter. Portion the batter between the pans so that they are 2/3 full and bake 2-2.5 hours at 275 until golden.

I might say until the tooth pick comes out clean, but seeing as you will hit fruits or nuts, the test does not work well. Aim for golden brown and a firm cake as oppose to soft and squishy when you press a finger to the top.

I like to bake these in tins that I will not have to move the cakes out of. It makes it easier to baste with booze. 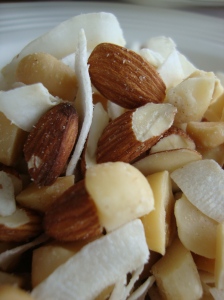 Baste the cakes while still warm and then baste once daily for a week. Continue to baste whenever you think about it, until the bottle is gone. If the cake is going to a party where it could be the center of attention, plan on making it at least a week or two in advance.

Tightly wrapped and basted well, the cake can last for a year or more.